The RHDV1-K5 team from the Centre for Invasive Species (CISS) has won a National Biosecurity Award for work in the 2017 release and monitoring of the rabbit control virus.

In related news, an evaluation of the impact of K5 has shown it was successful in many of the sites it was released, but its spread from those sites was limited. The impact of RHDV2, which also appeared in 2017, is thought to have been a factor. Since the release of K5 it has accounted for 10% of the deaths of rabbits sampled by CSIRO, while RHDV2 was behind 47%. 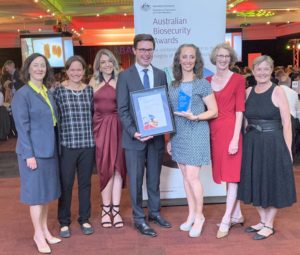 Researchers and investors from the Award winning K5 team. Image via CISS.