The national Bilby Recovery Plan is under review, and new research may help re-introductions in southern Australia.

The Bilby was adopted as a mascot by RFA to highlight the impact of rabbits on native wildlife and vegetation. According to the draft Recovery Plan for the Greater Bilby;

‘Bilby distribution is associated with an absence or low density of rabbits and low domestic herbivore stocking rates (Southgate 1990a; Woinarski et al. 2014). Introduced herbivores remove vegetation cover and cause soil compaction and loss, effects that are greater closer to water points. Herbivores also congregate along drainage lines, which are often prime bilby habitat in the Pilbara and Tanami (Bradley et al. 2015). Rabbits and bilbies share important food plants, such as bush onion (Cyperus bulbosus), and rabbits support higher densities of cats and foxes. It is also assumed that rabbits take over and exclude bilbies from burrows (Paltridge 2016).’

Bilbies once occurred over 70% of Australia, but now naturally wild bilbies can only be found in the Northern Territory. Special re-introduction programs are aiding their recovery in other areas.

Research on Eyre Peninsula has found that, unlike arid areas, bilby breeding in southern Australia is seasonal, ceasing in autumn. Researcher Karleah Berris concluded that re-introductions should avoid the non-breeding season to optimise breeding prospects. 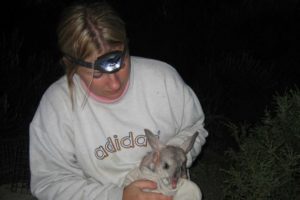