Calicivirus provided a foundation for what is now a growing private conservation sanctuary with rare animals being reintroduced to mallee woodlands in central Eyre Peninsula, SA.

Ecologists Katherine Moseby and John Read saw the potential to create a haven for wildlife when calicivirus went through and decimated the local rabbit population, allowing them to erect fencing and create a rabbit-free reserve.

‘So then we thought if we’re going to get rid of rabbits we might as well get rid of the cats and foxes,’ Dr Moseby said. That meant they could then reintroduce a suite of animals that used to be there but have gone locally extinct.

With rabbits gone, plant communities have made a come-back, and without feral predators native animals can survive in the recovered habitat.

The ‘Secret Rocks’ reserve is now home to a breeding population of bandicoots, which while once common have not been present for around 150 years. The aim is for the sanctuary to become a core area from which bandicoots, and other reintroduced species, spread to adjacent areas that are managed to contain feral animals.

‘We’re not keeping animals in, what we’re doing is keeping the threats out,’ said Dr Read in reference to their fencing program.

ABC journalist, Jodie Hamilton, has recorded their experience and achievements in ‘Backyard bush refuge bringing species back from brink of extinction’. To see the ABC News story, please click HERE. 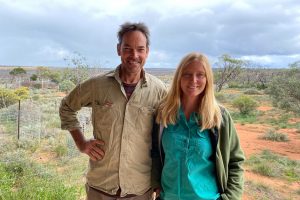