Medical doctor and scientist, Dame Jean Macnamara, is credited with making Myxomatosis the great success story of biological control and applied science that it is.

It wouldn’t have happened without her perseverance, and now the ABC is sharing her story, that of others who also worked to establish Myxomatosis, and the success that followed. It is available on TV (Landline) and the web (ABC NEWS). 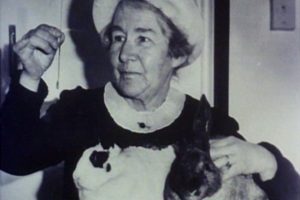