Long term monitoring on Macquarie Island has shown that when rabbit populations were high the probability of albatross breeding dropped by one to two thirds. The studies also revealed a web of interactions between cats, rabbits, vegetation and albatrosses.

Since the eradication of rabbits on the island, vegetation has rapidly recovered, and so has the probability of albatross species breeding successfully.

To read more about the research, and the interplay with climate change, read: 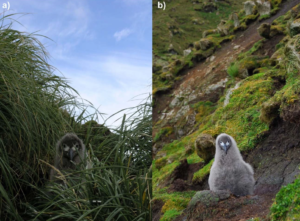