European wild rabbits are a risk to 322 threatened native species in Australia – double the number at risk from cats and foxes combined (Kearney et. al., 2019). ‘Competition and land degradation by feral rabbits’ is listed as a key threatening process under the Commonwealth Environment Protection and Biodiversity Conservation Act (EPBC Act), and a Threat abatement plan has been prepared for rabbits. The threatened species at risk due, at least in part, to rabbits include plants, mammals, birds, reptiles, invertebrates, and even fish and amphibians.

Invasive rabbits compete for feed and shelter with native animals, but much of the environmental harm they cause comes from how they graze (which changes the structure and composition of vegetation communities), and because they help maintain feral predators.

Even at very low densities – 1 rabbit per 2 hectares (0.5 rabbits : 1 hectare), or 1 warren per 10 hectares – rabbits can prevent the recruitment of entire species of plants, due to their selective grazing and searching out of palatable seedlings. In this way, they affect the structure and composition of vegetation communities, including several endangered ecological communities. If rabbits are seen, they are probably already affecting native vegetation and the ecology of native animals. 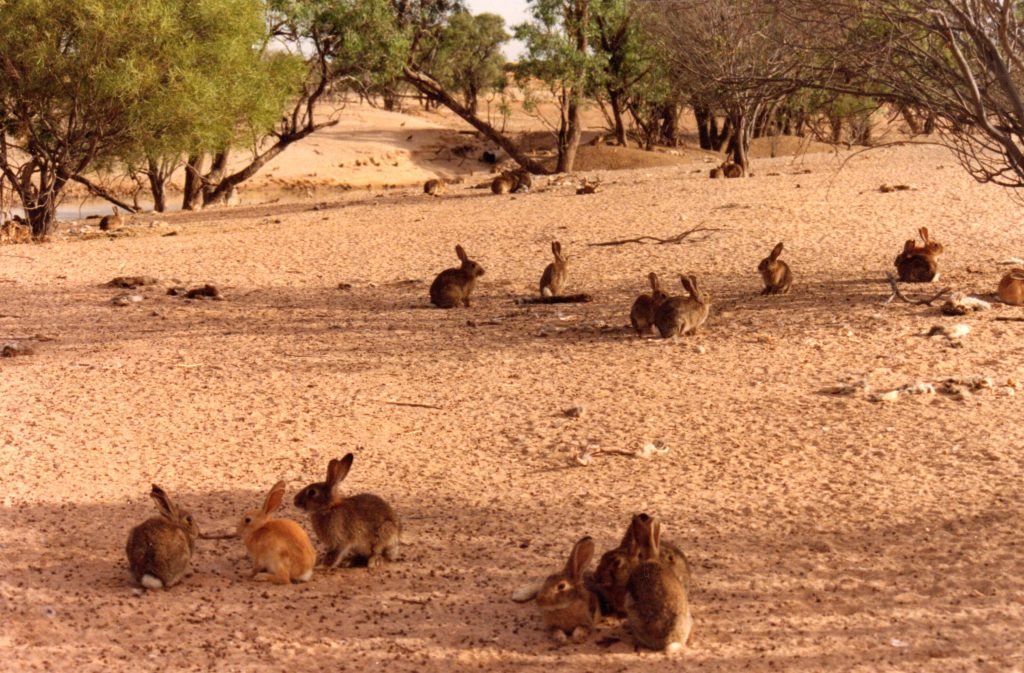 Rabbits seeking shade near water during drought in 1991. No ground cover of any sort remains and the ground is littered with dung and rabbit prints. (Image: Schulz, G. NSW Govt)

Grazing by wild rabbits, reducing the survival and recruitment of plants, is one reason why they are a risk to many threatened plants. For more information see the links below.

Although the impact from rabbit grazing is often severe, even at low densities, it is often unseen. Rabbits don’t remove giant, ancient trees from the landscape. Instead, they remove trees while they are tiny seedlings – before they are noticed. The consequence is even worse because they rob the locale of all the benefits those plants would have provided if allowed to survive to old age before being taken. 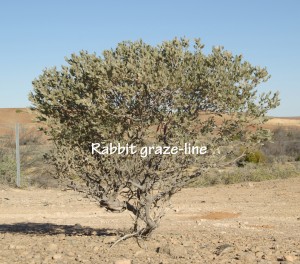 Rabbit grazing leaves a graze-line on shrubs, and consume any palatable plants below that height, e.g. seedlings.

Environmental regeneration following the release of biological controls for rabbits have been reviewed by Finlayson, Cooke & Taggart (in press). Their Assessment of Biological Controls and Total grazing pressure – Koonamore provide evidence of the unseen losses caused by European wild rabbits.

Biological controls have proven extremely effective in drastically reducing rabbit populations in Australia. They have led to a resurgence of native vegetation and native animals over immense areas in what must be amongst the greatest conservation programs in Australia. However, as successful as they have been, they may not reduce rabbit populations to the level needed for all plant species to regenerate (less than 1 rabbit/2 hectares), and they may only provide a ‘window’ of time (measured in decades) before their effectiveness wanes. 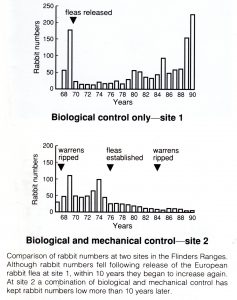 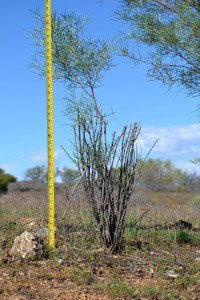 As native vegetation flourishes following the control of rabbits, so to do native fauna. Conversely, when rabbits thrive vegetation declines, and so do native fauna. The relationship is especially strong in herbivores competing for similar feed, such as small marsupials with limited foraging ranges. Rabbits may change the vegetation so it no longer suits other species, out-compete them for food, or affect the availability of shelter and nesting sites through vegetation loss or competition.

Examples of harm through competition for food or shelter with rabbits come from Red Kangaroos, Burrowing bettongs, the Greater bilby, and Assessments of Competition links below.

In areas where historic grazing pressure changed the landscape the continued presence of rabbits can hold it in a degraded (early successional) state, regardless of improved stock management and efforts to rehabilitate the landscape. Attempts to reintroduce native animals may fail due to this or there may be insufficient feed to keep them in breeding condition – i.e. they may survive but not be fit enough to breed (Finlayson, Cooke & Taggart).

Competition for burrows by more aggressive rabbits was a contributing factor to the extinction of the lesser bilby (Macrotis leucura) and the lesser stick-nest rat (Leporillus apicalis), and it is believed that rabbits may have been responsible for significant declines in the night parrot (Geopsittacus occidentalis) through habitat degradation. There is also evidence of rabbits acting aggressively towards native mammals to protect resources, even much larger ones like yellow-footed rock wallabies (Petrogale xanthopus) (Dept of the Env & Energy, 2016).

As ‘ecosystem engineers’, the changes rabbits cause have consequences well beyond the immediate impacts from consumption and competition. Rabbit-induced changes to vegetation can have far-reaching impact, affecting other animals and whole environmental communities. Witchetty grubs and bilbies, Glossy Black-Cockatoos, and Native rodents below provide examples.

Rabbits, at different stages of life, are preyed upon by some mammals, birds and reptiles – to differing degrees. For some predators (feral cats and foxes), rabbits may be an important part of their diet; for others they may only be an opportunistic or incidental feed. The relationships may vary with seasons and their relative abundance.

By sustaining populations of feral predators, rabbits indirectly increase the predation by those species on native animals. This is termed ‘hyper-predation’. Rabbit-induced hyper-predation by cats and foxes has been linked to the extinction and decline of conilurine rodents (Muradae), the biggest and most diverse group of Australian rodents, including Notomys and Pseudomys.

Rabbits are in the critical weight range for cats and foxes – they are the most preferred size for prey, offering good sustenance for the energy expended in hunting. Different animals have different hunting preferences. This is likely to be one factor why feral cat numbers decline when rabbit numbers do, but wedge-tailed eagle populations do not. Rabbit control is especially beneficial to native fauna outside the critical ‘small to medium size’ weight range for cats and foxes; e.g. kangaroos are larger. Although brush-tailed and crest-tailed mulgaras (Dasycercus spp) are within the critical weight range, they have prospered from rabbit control due to the improvement in ecological condition.

In summary, most evidence suggests that:

Overgrazing of any kind reduces the number of grass, forb and shrub species surviving, reduces plant cover (i.e. leads to more bare ground), depletes soil carbon, and increases the bulk density (amount of compaction) of soil. Controlling rabbits can halt these processes and open opportunities for rehabilitation and improved soil health. One study has estimated that rabbit control in 25% of the mulga woodlands of inland Australia would result in the sequestration of an additional 5-6 megatonnes of CO2 equivalents per year. 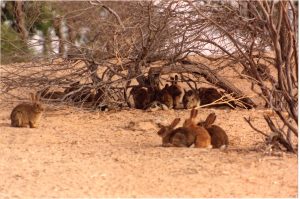 By removing above-ground and below-ground vegetation through grazing and warren construction, rabbits contribute to erosion – the loss of topsoil by wind and rain. That invites ‘early colonisers’ (plants, notably weeds, that colonise bare ground and degraded vegetation), and reduces the chance of successful establishment by native plants – which increases the susceptibility of many native fauna to predation from feral predators.

On-site erosion inevitably contributes to off-site degradation, be it sedimentation of waterways and dams or streambank erosion (with potential to degrade wetlands, or affect water supplies and treatment costs), or dust (resulting in air pollution and health problems, or the blocking of roads or damage to fences). The rate of sedimentation of Burrinjuck, Umberumberka (both in NSW) and Pekina (SA) reservoirs was greatly reduced following the spread of myxomatosis.

The critical rabbit density for the recruitment of many native seedlings is 1 rabbit : 2 hectares, and a similar level triggers a decline in native grasses. Above that density native grasses decline, due to selective grazing pressure, and are replaced by unpalatable introduced weeds adapted to tolerate rabbit browsing. Rabbits also disseminate weeds by spreading undigested weed seeds in their faeces, while the high level of nitrogen in their droppings promotes the growth of some weeds.