Recent research supported by the Foundation for Rabbit-Free Australia include:

Previous research, supported in part by RFA, sequenced DNA from rabbits around the country and found that they form 6 genetic clusters, indicating there were multiple introduction events during European colonisation. In this project, Amy Iannella investigated which genetic loci differentiated those clusters, and whether those differences are connected to genes that could cause varied susceptibility of rabbits to RHDV.

The investigation discovered one candidate RHDV resistance gene, differentiated based on rabbit ancestry. The differentiating gene, called MHC class 1, is a major immune gene which could also impact resistance to other infectious diseases such as myxomatosis. The most common MHC class 1 variant in Western Australia and South Australia appears to differ from that of the eastern states.

The methods developed in this study will allow rapid testing for geographic differentiation of any newly identified resistance genes as other studies across the globe continue to uncover the genetic causes of RHDV resistance.

The project method was: 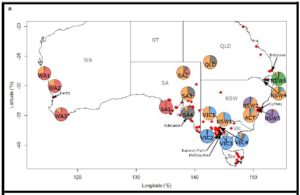 University of Adelaide PhD student, Emilie Roy-Dufresne, was assisted by RFA in a project to model the distribution and population dynamics of wild European rabbits in Australia. The work included mapping the potential invasion range of wild rabbits in Australia, testing how model predictions change when micro-habitats are considered, and developing  a pest management modelling framework for wild European rabbits that accounts for varying demographic rates, habitat suitability, dispersal processes, and density-dependent processes.

RFA assisted with funds for training in statistics and Bayesian modelling, and attendance at an international scientific conference. Emilie was subsequently a contributor to a paper by Brown et.al. ‘Models of spatio-temporal variation in rabbit abundance reveal management hotspots for an invasive species‘, published in EcoEvoRxiv Preprints. 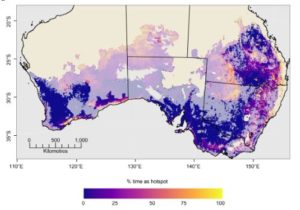 Flinders University research associate, Dr. Louise Barnett, was helped by RFA to better understand how the myxomatosis and RHD viruses interact. Eighteen years of mark-recapture, dead recovery, and antibody assay data from Turretfield (SA) has been used to model the impact of myxoma and RHD on the survival of rabbits with different exposure histories – indicating that rabbits previously exposed to myxoma are more susceptible to RHDV. That information suggests that new pathogens could reduce rabbit survival by a substantially greater margin than their individual effects measured in isolation from other pathogens.

RFA funding helped Louise with model enhancement to enable the potential impact of new pathogens to be better predicted. A paper submitted to the Journal of Applied Ecology presents findings from this research and a ‘progress report’ presentation, ‘Using the Turretfield rabbit population to assess the impact of myxomatosis and rabbit haemorrhagic disease‘, was given at a RFA Annual General Meeting. 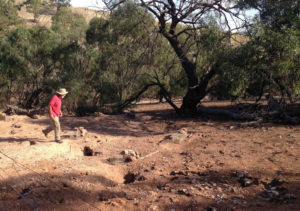 It is now accepted that flies are a major vector for the transmission of RHDV. Thanks in part to former RFA funding, research also showed that flies could be used as an easier way to measure the spread of the virus within rabbit populations compared to relying on rabbit carcasses – but an efficient sampling and analysis were not available.

Dr Adam Croxford, at the University of Adelaide, used RFA and PIRSA funding to investigate a method for optimum extraction of RHDV viral RNA from bulk samples of flies, seeking a better sampling option to make it easier to monitor and understand the spread and interactions between various forms of RHDV, resulting in better rabbit control programs. The work helped develop freeze drying and bulk analysis processes and contributed to a method now employed nationally by CSIRO.

For more information on the project, see the proposal ‘Monitoring RHDV in flies’ and final report ‘Fly surveys for monitoring RHDV2‘.

The Koonamore vegetation monitoring reserve shows rabbit control is essential for the regeneration of many tree and shrub seedlings – and a donation from RFA helped with re-fencing. Thanks to funding support from RFA and others, Koonamore – the longest running vegetation monitoring project in Australia – has been able to upgrade part of the reserve’s rabbit-proof boundary fencing.

Officially titled the TGB Osborn Vegetation Reserve, Koonamore Station, the 4km square reserve is managed by the University of Adelaide and an enthusiastic team of volunteers, lecturers past and present, and students. The site is used by students and researchers from both Adelaide and Flinders universities.

For more information, see ’90 Years of Change. The TGB Osborn Vegetation Reserve, Koonamore’, or search for ‘Koonamore’  videos  of photopoint sequences on Youtube. 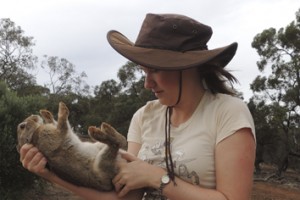 Field research is an important part of research into rabbit control.

A RFA supported PhD scholarship (Amy Ianella) mapped out the family trees of rabbits to see if genetics were behind an apparent increase in resistance, or whether it was more due to seasonal factors like the abundance of insect vectors and the innate resistance of very young rabbits (who, if infected, retain that immunity for life). The study found that a small number of older rabbits were disproportionately responsible for the majority of surviving offspring, indicating a genetic factor at play. However, seasonal factors also affected survival rates, probably through a combination of feed availability and seasonal disease outbreaks.

For more information see the project report or media article.

Former investments in research by the Foundation for Rabbit-Free Australia included:

The Foundation has been active in building the capacity of Australian research infrastructure to be effective in rabbit control research. Activities have included: