The Centre for Invasive Species Solutions (CISS) hopes to register RHDV2 as a biological rabbit control by 2023.

The form of rabbit calicivirus appeared in Australia from overseas in 2015, just ahead of the controlled release of calicivirus RHDV1-K5 in 2017. Since then, RHDV2 has been responsible for the death of nearly half the rabbits analysed by CSIRO from around Australia. RHDV2 is able to infect and kill young and old rabbits, while K5 kills rabbits two months or older. Younger rabbits that are infected by K5 but survive can be immune to it for the remainder of their life.

Having RHDV2 registered for controlled release would permit it to be used year-round, including during breeding seasons, and in conjunction with K5. It must be shown to be an effective and humane control before being registered with the Australian Pesticides and Veterinary Medicines Authority. Virologists are also working to develop a vaccine for release prior to its registration. RHDV2 has not been found to infect any native or other introduced species apart from rabbits. 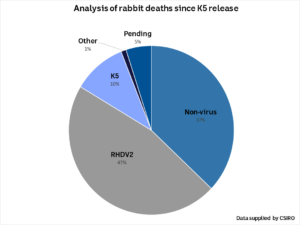