The European wild rabbit is an introduced pest throughout the southern two thirds of Australia. They affect natural environments, primary production, and even townships and infrastructure. Wild rabbits are ‘ecosystem engineers’, fundamentally changing whole ecosystems. Their broad distribution, and the wide range of problems they cause, make them the nation’s worst vertebrate pest. European wild rabbits adversely affect over 300 threatened native species, change landscapes, and cause losses of over $200 million a year to agricultural production.

The benefits of rabbit control include: 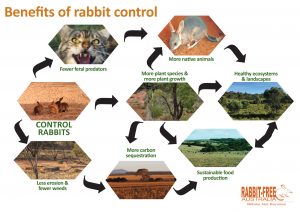 European wild rabbits are native to southwest Europe and northwest Africa – and have been introduced to every continent on earth except for Antarctica and sub-Saharan Africa. They often cause environmental harm in their new homelands, and their impact has been very pronounced in Australia where seasons can permit year-round breeding, free of some of their traditional diseases and the many predators they faced in their home lands; including eagles, lynx, martens, ferrets, mongooses, cats and foxes.